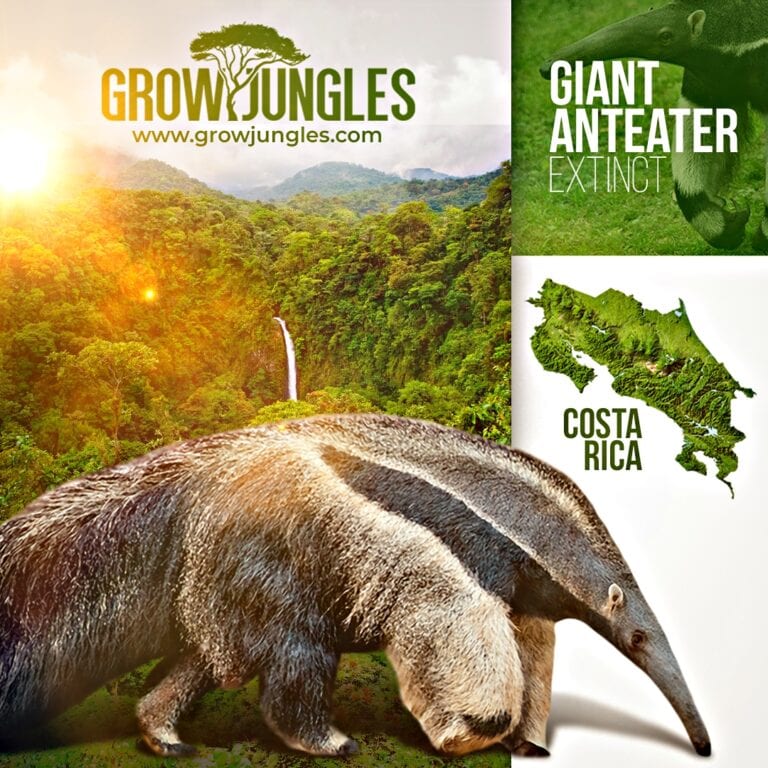 Distribution: The global distribution of the giant anteater (Myrmecophaga tridactyla) is endemic throughout South and Central America, but absent from North America (1). They can be found inhabiting a diverse range of native habitats, including grasslands, savannas and both humid and dry forests. They also have shown a presence in agricultural landscapes, including pasturelands, managed forests, and sugarcane fields.

Metabolic rates: These peculiar animals are terrestrial but can also swim and climb trees. They are characterized by their low basal metabolic rates, presenting the lowest among placental mammals (2). Therefore, depending on the temperature, giant anteaters can be active during the day or at night.

Diet: Giant anteaters are primarily carnivores, and their diets mainly consist of ants, termites, insect larvae, and beetles (3), which they dig up by using their powerful forelegs and sharp front claws. They use their long, sticky tongue to capture their prey. After all, anteaters belong to the suborder Vermilingua, which means “worm tongue.” Their tongues are an impressive 2 feet in length and one-half inch in width (3).

Life history: They are solitary animals that only pair up when mating. Gestation, which occurs once a year, lasts approximately between 180-190 days. The offspring tend to ride on their mother’s back for approximately 6 months but continue to stay with their mother until she is pregnant again (3). Typically, a giant anteater’s average lifespan is 14 years in the wild.

Sadly, humans are arguably the giant anteaters’ greatest threat. True to the matter, the giant anteater is classified as “vulnerable” by the International Union for Conservation of Nature and Natural Resources and is also on the Convention on International Trade in Endangered Species 2000 Red List of Threatened Species (3). Due to the threats they face, only about 5,000 anteaters remain in the wild and are now considered extinct in areas of Belize, Guatemala, Uruguay, and Costa Rica (4). They were last recorded in Corcovado National Park, La Selva and the Santa Rosa National Park about two decades ago (5).

There is minimal data on longevity, survival rates, and reproductive success, as there is a huge gap in knowledge (6). Here we will continue to discuss the range of threats the giant anteaters are currently facing and why research and change are desperately needed in order to protect these weird yet wonderful creatures.

Habitat loss and fragmentation: Arguably, these factors are the main cause of the giant anteaters’ population decline. Deforestation caused by large monocultures alongside pasturelands, which in turn are converted into croplands (7), is a huge driver in habitat loss, as well as the continuing development of infrastructure.

Fires: Due to their slow movement and flammable coat, the giant anteater is extremely vulnerable to fires. Human-provoked fires can quickly spread and are difficult to control, especially during dry seasons (8).

Poaching and roadkill: Due to poor law enforcement in Costa Rica, giant anteaters are often killed for food and superstitions about being bad luck. Due to their slow movement and poor eyesight, giant anteaters are also vulnerable to being roadkill. So much so that it has been recorded in Cerrado that they are among the most frequently killed animals on these roads.

Pesticides/ chemicals: Giant anteaters can be poisoned by pesticides used for controlling ants and termite populations.

By partnering up with conservation projects, landowners can now acquire knowledge about the wildlife that is found on and around their properties. By raising this awareness, landowners will be more likely to prevent deforestation, fires, and the poaching of giant anteaters inside their properties. Collectively, landowners and businesses can advertise as “environmentally friendly” and even go as far as creating ecotourism activities. In addition, rural workers and families who gain knowledge about wildlife can benefit from ecotourism activities and generate further income.

Teachers who become educated about giant anteaters can pass the knowledge onto children and therefore, reduce the misconception about the species. In terms of roadkill, these numbers can be reduced with awareness and cautious driving. Universities are being used to develop ongoing research. The knowledge about this species is key in guiding conservation actions, and NGOs are also being encouraged to monitor the populations.

Unfortunately, there are many barriers to conservation. Although there have been successful conservation efforts in Costa Rica (53% of the country’s surface is still covered by forests generating most of its energy from renewable sources in recent years) (9), population demands on these resources are increasing due to urban expansion. Biodiversity conservation and management cannot be separated from the increased demand for ecosystem services. This, alongside the fast pace of climate change, will undoubtedly accelerate the rate of species extinction. Therefore, it is vital that more research be done to monitor species and work alongside national parks and local communities to prevent further species extinction, which is becoming all too realistic.

PrevPreviousEcological Diversity And Its Role In Nature
NextThe Extinction of the Harpy Eagle (Harpia harpyia) in Costa RicaNext
Post Views: 246